A consultation on improving hospital services for the people of Shropshire, Telford & Wrekin and mid Wales received more than 18,500 responses, local NHS leaders have revealed.

The total number of responses received as part of the consultation was 18,858 - meaning more than 3% of the population served by the county’s two hospitals had their say. 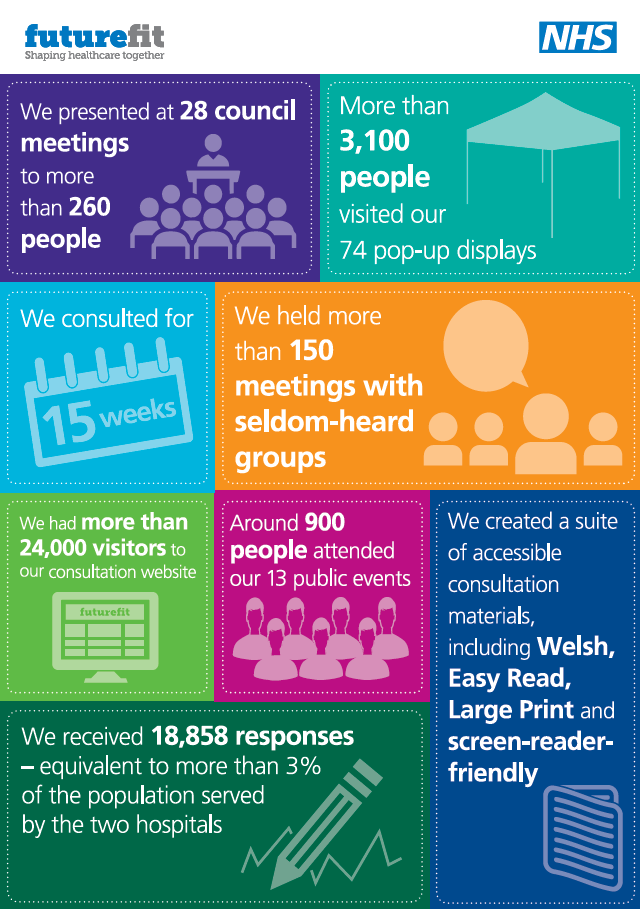 The figure is considerably higher than the average response rate for UK public consultations.1

The Future Fit public consultation, which asked people for their views on improving the hospital services provided at the Royal Shrewsbury Hospital in Shrewsbury and the Princess Royal Hospital in Telford, ran from 30 May to Tuesday 11 September 2018.

“Thank you to the thousands of people who submitted a response to our consultation. We’re really pleased that we’ve been able to hear from a wide range of people across Shropshire, Telford & Wrekin and mid Wales so we can take people’s views and concerns into consideration before making a decision.”

“The huge response to the consultation shows how much people care about their local hospitals. Their feedback will help us to make sure that we provide the best possible healthcare to the population of Shropshire, Telford & Wrekin and mid Wales.”

During the consultation period, around 900 people visited the 13 public exhibition events, and more than 3,100 people were engaged with as part of a programme of 74 pop-ups. Around 150 events and engagement sessions were held with seldom-heard groups during the 15-week consultation, as well as 28 council meetings.2

All feedback from the consultation is currently being collated and analysed by independent consultation specialists, who will then produce a report which will be conscientiously considered by the Future Fit Programme Board3 and the boards of Shropshire and Telford & Wrekin CCGs as part of the decision-making process. The Joint Committee4 of Shropshire and Telford & Wrekin CCGs will convene early next year to make a final decision on the proposed changes to the hospital services provided at the Royal Shrewsbury and Princess Royal hospitals.

Information provided by the Consultation Institute notes the following:

The Joint Committee of the two CCGs, which decided to approve to public consultation with a preferred option in August 2017, will be reconvened to receive the final Decision Making Business Case (DMBC). The Joint Committee will be constituted solely of voting members. It will be chaired by a voting Independent Chair and it will include two independent voting clinicians.